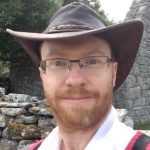 Hello, I’m using this site to blog about my professional archaeological life, principally my academic research but also my lecturing and private sector work. I’m an archaeological geophysicist (entry level description: I image sub-surface archaeology using a variety of scientific instruments to capture “X-ray” pictures of archaeological features, objects and deposits), and I work in both the academic and private commercial sectors. I have specialisms in the use of legacy data; 4D time-lapse assessments; the application of electromagnetic induction for the assessment of archaeological sites within challenging environments and variable geological backgrounds; induced polarisation; upland archaeology; conflict archaeology and archaeological deposits threatened by coastal erosion.

I was the co-owner and director of Earthsound Archaeological Geophysics (2002-2019), the largest private sector company in Ireland dedicated to the investigation of archaeological remains using geophysical techniques. Although primarily a commercial organization (surveying a wide range of sites in relation to planning applications, including 73 linear corridor infrastructure projects), Earthsound maintained a high academic profile with a healthy publication record, as well being an Industrial Partner in PhD research and partner for a variety of academic research and community archaeology projects.

Since 2008 I have acted as a consultant to the Serious Crime Review Team (a cold case investigation unit) of An Garda Siochána and regularly provide them with forensic geophysical surveys.

Between 2010-2014, I held a National Roads Authority Fellowship and completed my PhD “A reappraisal of archaeological geophysical surveys on Irish road corridors 2001-2010” (University of Bradford, 2014), which resulted in a number of peer-reviewed publications and a procedural guidance document for NRA (now TII, Transport Infrastructure Ireland) staff on how to commission and procure archaeological geophysical surveys on infrastructure projects.

I Lecture in the Department of Environmental Sciences, Institute of Technology Sligo, Ireland, where I’m responsible for delivering 5 modules in Applied Archaeology at Level 6 (Higher Certificate), Level 7 (BSc degree) and Level 8 (BSc Honours degree), and supervising postgraduate research. I teach modules in both practical and theoretical Archaeological Geophysics, GIS and Geoarchaeology. I’m a member of the Centre for Environmental Research Innovation and Sustainability (CERIS) research cluster at IT Sligo. I’m currently supervising a PhD candidate assessing Napoleonic-era Signal Defensible Guardhouses in Connacht and Ulster. I’m a geophysicist for the ERC-funded Lost Frontiers Project, collecting geophysical data and sediments to map palaeolandscapes beneath the Irish Sea.

I have over 17 years of geophysical experience working on archaeological sites in Ireland and Northern Ireland as well as Britain, Italy and Norway, across all archaeological periods, from Mesolithic sites at Larne, Neolithic henge monuments at Stonehenge, proto-Roman settlement at Civitalba, boathouses at the Roman harbour of Portus, Hiberno-Scandinavian longphort at Waterford, Viking settlements at Avaldsnes and Stiklestad, the Black Pig’s Dyke, conflict sites of Vinegar Hill, Cheriton, Kinsale and Stiklestad and the garden archaeology of Castle Coole to Second World War air raid shelters in Ireland and Britain.

My published work tends to reflect my personal research interests in archaeological geophysics, the use of novel techniques and the assessment of legacy data as well as selected outputs from 17 years of work in the private sector. My grey literature outputs currently account for more than 200 archaeological geophysical reports mostly derived from planning applications and EIAs, as well as research and community archaeology projects. I have published peer-reviewed articles in Archaeologia Polona; Archaeological Prospection; the Journal of Conflict Archaeology; the Journal of Irish Archaeology; the Journal of Island and Coastal Archaeology, Near Surface Geophysics and I have written chapters for several peer-reviewed books and monographs as well as extended abstracts/proceedings from numerous international conferences. In 2019 I published my first book, New Global Perspectives on Archaeological Prospection (see here for details).

I am a full member of the Institute of Archaeologists of Ireland (IAI) and previously served on the Board as Chairperson (2018-2019), Vice-Chairperson (2015-2017) and Honorary Secretary (2013-2015). I’m on the Management Committee for the International Society for Archaeological Prospection (Conference Secretary 2017-2019, Vice Conference Secretary 2019-2021). I’m also a member of the Centre for Environmental Research Innovation and Sustainability (CERIS), the Wild Atlantic Way Research Cluster and the Geoforensic International Network.

The blog is independent of the organisations I work for and all views are my own.